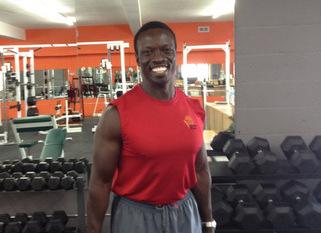 With a level of tenacity and dedication to rival any Olympic sportsman, Stephen Menya turned his entrepreneurial dreams and passion for fitness into the very successful endeavor of running his own gym. Lion’s Gym is a full-featured exercise and training facility, with the personal touch that other large franchise gyms can’t touch. With personal training services tailored for each individual client, and pricing to stay affordable, Menya maintains a human element through everything that Lion’s Gym offers. It is no wonder that his gym attracts a wide variety of clientele, from professional athletes to highly successful businessmen.

Stephen Menya was born and raised in Kenya. He then immigrated to the United States in 1993 with aspirations to train and represent his home country in the 1996 Olympic Games. A track star, his dreams were helped when one of his Olympic teammates became ill, and Menya was able to take his place on the global stage to compete in the 400m and 800m events. He then secured a college scholarship to Graceland University and ran in the Midwest Conference. A torn leg muscle shortened his running career, but did not quell his passion for fitness and personal development.

Starting Lion’s Gym with no prior business experience – let alone never managing a fitness facility – never frightened Menya in the least. His story is very American. Stephen Menya believes that anyone who is given the opportunity to do something in this country can succeed if they work hard, and that their effort would be rewarded handsomely. With hours of sweat and dedication, he has proven wrong anyone who told him he was incapable or would be unsuccessful in this endeavor.

Stephen Menya came to ADC a few years ago looking for resources to expand his facility, as well as technical assistance to help meet growing demand. Receiving a small business loan and ongoing counseling support, Lion’s Gym has continued to grow in size, reputation, and financial success. Located on West Broadway in Robbinsdale, it offers a variety of services, from the famous Zumba party classes to Boot Camp workout sessions, as well as pre- and post-natal fitness classes for young mothers. With personal training packages tailored to one’s personal goal and/or body type, Menya operates on the belief that proper training, discipline, and attitude can unleash one’s self-esteem and delve into their inner passion and excitement.

ADC is proud to have such a driven and successful client as Stephen Menya, and flattered to provide what he calls an “African Support System” to bring him the ongoing assistance, knowledge, and network necessary to maintain the success of Lion’s Gym.